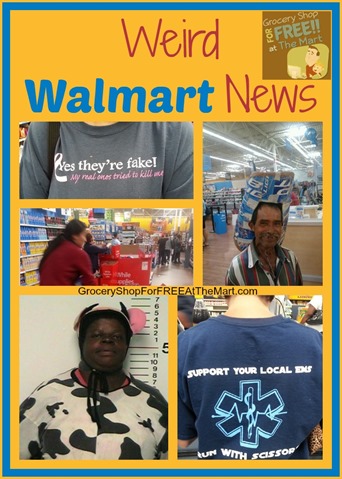 These Weird Walmart News posts have become an oasis in the middle of all the Holiday craziness.  It’s nice to know there are people having stranger or more stressful Holidays than I am.

Thief fakes heart attack so friend can steal toys in Florida Walmart – So they fill up a cart with toys and head to the front door.  One guy fakes a heart attack as a distraction, the other guy walks out with the toys.  Then, (and this is the best part) once the guy with the toys is out, the heart attack guy just gets up and leaves like nothing happened.  Master thieves, they are not.

Walmart Ripped For Confusing Carmelo Anthony, Jeremy Lin Dolls – So Walmart mislabels a toy and Keith Olbermann makes a big deal out of it.  I don’t remember him being so strident when he was on ESPN but he has gotten almost unwatchable.

Family of man killed in BB gun case sues police and Walmart –  This is a horrible story but I’m not sure how anyone could think Walmart is at fault.  It did make my remind my son not to walk around with a toy gun in his hand.