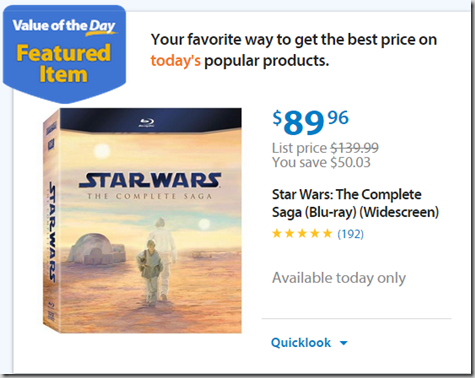 Here is today’s Walmart Value of the Day!  You can get Star Wars: The Complete Saga (Blu-ray) (Widescreen) for $89!

"Episode I: The Phantom Menace." Witness the first historic meeting between young Anakin Skywalker and Ben "Obi-Wan" Kenobi, the young Jedi Knight who comes to be his mentor for a time. The film explores the beginning of the legend as the Empire begins to take shape amidst a galaxy in turmoil. "Episode II: Attack of the Clones." Anakin Skywalker has grown into an accomplished Jedi apprentice, and he faces his most difficult challenge yet as he must choose between his Jedi duty and forbidden love. Relive the adventure the way it was meant to be seen in spectacular digital clarity, including the climactic Clone War battle and Jedi Master Yoda in the ultimate lightsaber duel. "Episode III: Revenge Of The Sith". Torn between loyalty to his mentor, Obi-Wan Kenobi, and the seductive powers of the Sith, Anakin Skywalker ultimately turns his back on the Jedi, thus completing his journey to the dark side and his transformation into Darth Vader. "Star Wars: A New Hope": A long time ago in a galaxy far, far away… The Jedi Knights have been exterminated and the Empire rules the galaxy with an iron fist. A small group of Rebels have dared to fight back by stealing the secret plans to the Empire’s mightiest weapon, the Death Star battle station. The Emperor’s most trusted servant, Darth Vader, must find the plans, and locate the hidden Rebel base. Princess Leia, a captive Rebel leader, sends out a distress signal that is intercepted by a simple farm boy, Luke Skywalker. Seizing his destiny, Luke takes up the challenge to rescue the princess and help the Rebellion overthrow the Empire, along with such unforgettable allies as the wise Obi-Wan Kenobi, the cocky Han Solo, the loyal Chewbacca, and the droids R2-D2 and C-3P0. "The Empire Strikes Back": After a devastating attack on their ice base on the frozen planet of Hoth, the Rebels are scattered by Imperial pursuit. Luke Skywalker seeks out the mysterious Jedi Master Yoda in the swamps of Dagobah, while Han Solo and Princess Leia outrun the Imperial fleet on the beautiful Cloud City of Bespin. In an attempt to convert Luke to the dark side, the evil Darth Vader lures young Skywalker into a trap. In the midst of a fierce lightsaber duel with the Sith Lord, Luke faces a terrible truth about the Skywalker legacy. "Return of the Jedi": In the spectacular final chapter of the "Star Wars" saga, Luke Skywalker and Princess Leia must travel to Tatooine to free Han Solo by infiltrating the wretched stronghold of Jabba the Hutt, the galaxy’s most loathsome gangster. The Galactic Civil War culminates in the ultimate showdown, as the Rebel forces gather to attack the seemingly defenseless and incomplete second Death Star in the battle that will determine the fate of the galaxy.
Audio Commentary for each move with George Lucas and Crew, Never-before-released audio Commentary for each movie from archival interviews with Cast and Crew, 45 deleted Scenes, Cast & Crew interviews, Props, maquette and Costume Turnaround, Matte painting and Concept art, The making Of Star Wars 1977, The Empire Strikes Back SPFX 1980, Classic Creatures: Return Of The Jedi 1983, Anatomy Of a dewback, 1997, Star warriors, 2007, Star wars Tech 2007, A Conversation with The masters: The Empire Strikes Back 30 years later 2010, 90 miinutes Of Star Wars Spoofs.

Here is today’s Walmart Value of the Day!  You can get Star Wars The Black Series Speeder Bike Vehicle with Biker Scout Figure for $30!

Chased by the Rebels, Biker Scouts race their Speeder Bikes through the Endor forest. The Biker Scouts weave at breakneck speed through the trees, trying to outrun the Rebels so they can warn the shield generator station of the enemy’s presence. Re-create the biggest battles and missions in the Star Wars epic with collectible vehicles and figures from The Black Series! This highly articulated Star Wars The Black Series Speeder Bike Vehicle is part of the ultimate Star Wars figure collection. He looks like a Biker Scout down to the last detail, including his realistic-looking blaster and rifle. His Speeder Bike vehicle is sleek and detailed, and comes with a stand you can use for a "hovering" effect. When you put them together, either in your adventures or collection, it’s as if one of the most quintessential Star Wars scenes is happening in front of you.

Tags: Walmart Value of the Day 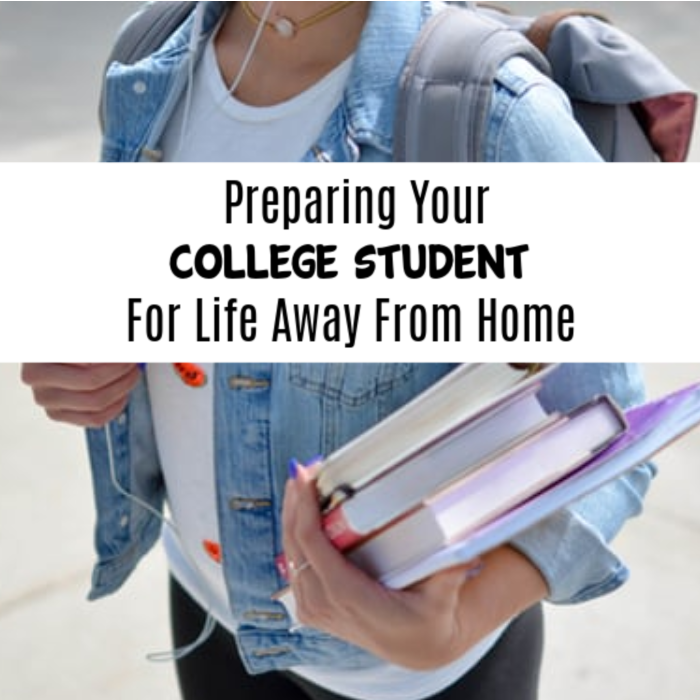 Preparing Your College Student For Life Away From Home

Preparing Your College Student For Life Away From Home